It is a time of shaky peace on the planet Earth. Several deluded terrorist groups have attempted to sow fear among the first world citizens, with some success. In addition, the looming global threat of climate change threatens to drive thousands of species to extinction and make life miserable for human beings several generations down the line.

In the interest of securing a bright future for the planet, the Alliance of United Nations prepares for its 70th General Assembly, where the representatives of its countries will try to find peaceful and responsible solutions.

Meanwhile, in a small apartment near a Midwestern university, a young blogger excitedly anticipates the upcoming new Star Wars movie. In celebration of this film, he has decided to watch one of the previous movies and write a brief discussion of it each month leading up to the grand release of Episode VII. Now, he has come to Episode IV: A New Hope, where it all began....

This is the one that started the grand fantasy. When the boy in the desert followed the old hermit on an adventure to the stars, the hearts of millions were captured around the world in a storm that has lasted for generations. It landed science fiction a solid foothold in film, and lit the first spark of science fiction’s passion in my soul. Star Wars brought forth many iconic staples of nerd culture that have only grown stronger with the time that has passed. 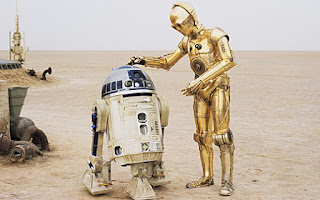 Right from the get-go we were treated with the lovable droid duo C-3PO and R2-D2. 3PO’s insisting on proper behavior, based on his protocol programming, clashes brilliantly with R2’s mechanical “get the job done” directive. 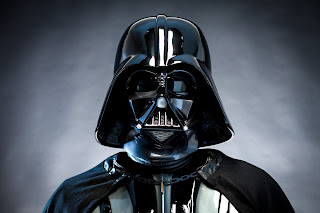 Not five minutes later, a half-man, half-machine walks onto the scene in a black life support suit, with a mask that speaks of a life devoted to power and intimidation. He is Darth Vader, the trans-universal symbol of evil.

The terror of the Empire, the death star was the ultimate weapon. Powerful enough to destroy planets, it was the perfect tool of fear to keep anyone who might question the supreme dominance of the Empire in line. 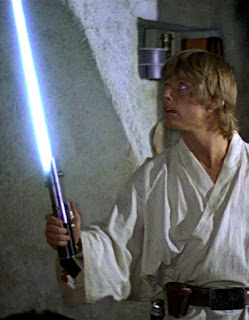 Next up, we’re given the lightsaber, the weapon of the Jedi Knights. Like a sword, but with lasery-like-ness for the blade. Everyone who saw the movie as a kid has dreamed of owning one and dueling some grim-masked bad guy.

And there is the Force itself. Though confined in this movie to the idea of a mystical energy, the Force may be the number one memorable aspect of all of Star Wars. A source of energy and power, with a light side and a dark side, the Force guides events in the galaxy and can be used to obtain superhuman powers.

Of memorable and iconic things in Star Wars Episode IV, many more, there are. If I were to write about each one this post would far too long. Here are a few more of them in one big Force-saturated montage. 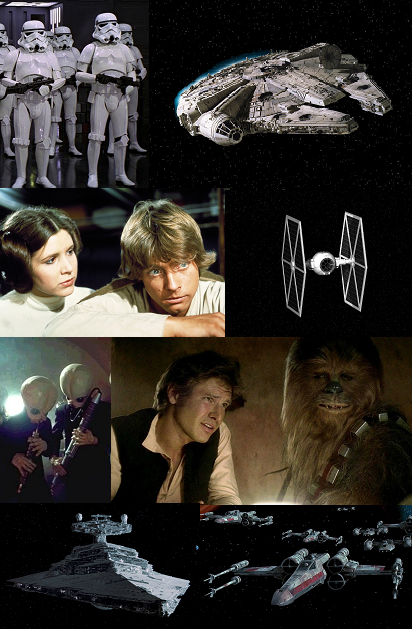 It is hardly imaginable that one single movie could bring up so many things that have so thoroughly permeated the culture. Star Wars Episode IV has spawned not only five other movies with three more on the way, but hundreds of novels, comics, and video games spanning tens of thousands of years in the galaxy’s timeline. Heck, “Jedi” is even an official religious affiliation in real life. It is unfortunate that the Legends—that is, all of the media besides the movies and cartoons—have been de-canonized, but they still remain as a testament to the timeless legacy of A New Hope.


Star Wars Countdown:
The Phantom Menace
Attack of the Clones
Revenge of the Sith
A New Hope
The Empire Strikes Back
Return of the Jedi
The Force Awakens
Posted by Christian Horst at 10:27 AM