This discussion, of course, contains spoilers. It is highly recommended to have seen the movie before reading further. 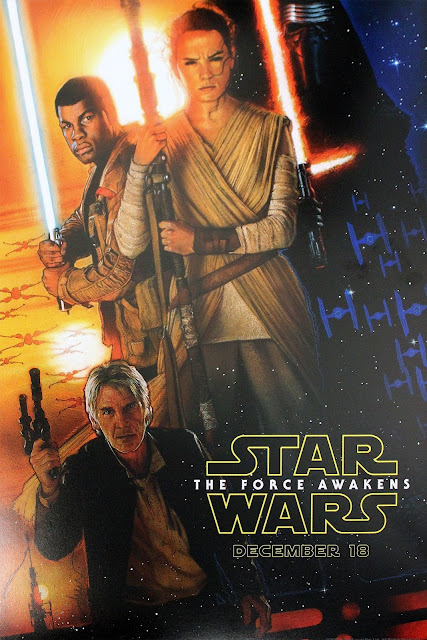 At long last, the moment we have been waiting for all this time is here! Star Wars Episode VII: The Force Awakens has hit the theaters, blowing the minds of generations. There are many reasons for its dramatic success: the on-location shooting, the return of the great characters from the original saga, the role the Force played, and that the stormtroopers were shown to be people, not just faceless cannon fodder. It’s hard to nail down any one thing that made the movie great, but to me the feature that outshone all the others was the new characters.

As always, John Williams has come up with some amazing new music. The most notable debut this time is “Rey’s Theme.”

The first time I saw the movie, I made a huge mistake. I watched it with the intent to critique the director by the standard of the original trilogy, not to experience the continuation of the story of a fantasy world. Because of this I came away disappointed—angry, even—with the large list of things that I would have done differently if I had been in charge. But I recognized this mistake immediately after the screening finished, and two days later when I saw it again and watched it properly, I was utterly swept up in it and all my dark side feelings toward the film melted away.

The new hero, Rey, is awesome. When she is introduced, she has been living secluded from the goings-on of the galaxy, making everything feel new, like it did as we followed Luke in A New Hope. But even though war forces itself upon her she is able to keep her head on her shoulders and come up with a plan of action. Rey seems to be fascinated with the Force, but also to have a strange aversion to it, which can be seen in her encounter with the Skywalker family lightsaber. Both sides of this coin are shown as Rey climbs the stone steps to Luke, where she is clearly afraid of whatever is about to come, but at the same time is driven forward by the need to know and experience it.

The new villain, Kylo Ren, is also awesome. Far from the hardened, controlled instruments of destruction that we saw in the Sith, Ren struggles to keep some some grasp on his emotions, often losing control of them completely. He feels the Light Side pulling on him, which calls into question the Jedi view that the Dark Side is a black hole that swallows and devours anyone who steps too close, a view which all of the previous films have implicitly taught us to believe. Most importantly, though, Kylo Ren doesn’t follow the Dark Side out of a desire for power or revenge, but because he believes it is right. His struggle comes fully to the surface in the fateful scene where he must decide, and act on that decision, to kill his own father, Han Solo.

The Force Awakens is a promising beginning to a new era of Star Wars. Whatever the future will bring, I have no doubts that it will be great. From the revelation that when Luke went missing, he was searching for the first Jedi temple, I suspect the next two episodes will involve the origins of the Jedi and Sith. I don’t know how similar the new history will be to the Legends timeline, but I hope to hear “Duel of the Fates” in episode 8 or 9, perhaps revolving around some unknown embodiment of the Dark Side in some forgotten region of the galaxy. But right now, I am delighted to have been given such a satisfying, adventurous return to the Galaxy Far, Far Away.


Star Wars Countdown:
The Phantom Menace
Attack of the Clones
Revenge of the Sith
A New Hope
The Empire Strikes Back
Return of the Jedi
The Force Awakens
Posted by Christian Horst at 4:34 PM