Science Fiction Can Make You Dumber


Last year I wrote a post called “Science Fiction can Make You Smarter,” where I discussed how, as a side-effect of its speculative nature, science fiction can introduce concepts and ideas, making it easier to understand scientific topics. But fiction usually only implements, rather than explains, the concepts, ignoring their scientific context. For story purposes this is fine, because lengthy explanations can interrupt the flow and cause readers to lose interest. But, as in all cases when knowledge is presented without sufficient explanation, it allows ideas to get mixed up. When one story gets something wrong, another follows, and then another, and soon the misconceptions have spread though the culture like weeds. Once a false idea has taken root in a reader’s mind, it can be difficult to learn about the actual phenomenon, because they must first let go of the understanding they already have. With that in mind, here are my top four science myths ignorantly perpetuated by science fiction culture.

4: Alternate dimensions.
Sometimes when writers take the characters out of their world and into another, they call the new place another dimension. But a dimension is not a place, it is a pair of directions. You may have to leave our 3D space by moving through another dimension to get to the new 3D space, just like you have to move through the three dimensions we are all familiar with to get to the house next door. Instead, the new place should be called an alternate reality, another universe, or if you want to go string theory, a parallel 3-brane.

3: Energy is a substance.
Somewhere along the line there came a notion of something called “pure energy,” represented in the movies as an amorphous substance that floats in midair and glows. Alas, the scientific community can be just as guilty of perpetuating this myth as science fiction. Energy is not a thing in itself, but a quality that things can have and give to each other. There are many kind of energy—motion, heat, light, mass, stored, and even vacuum—but none is any more or less “pure” than any other.

2: Parallel realities branch off whenever we make choices.
Parallel realities are used in science fiction to bring up “what if” scenarios. They are worlds just like ours, but with some things different. The characters can meet themselves and see what would have happened if things had turned out differently. But the way it is usually explained is that a new reality is made every time someone makes a decision, which is simply wrong. 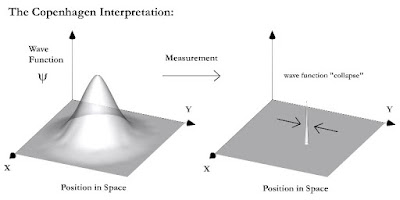 Reality-splitting is actually a hypothetical interpretation of quantum wave function collapse.When quantum mechanics was being developed in the 1920s, experiments showed that a subatomic particle can be in multiple places at once, until it is measured. When something interacts with it, the wave “collapses” and the particle is found to be in one place. But why that place and not somewhere else, if it had the same probability to end up in multiple places? The many-worlds hypothesis tried to solve this question by saying that the interaction with the electron caused the universe to split. In one universe the electron was in one place, while in the other universe the electron was in the other. Few scientists subscribe to the many-worlds view these days, but if science fiction wants to use it to explain parallel realities, then they should understand that the splitting happens because of particle interactions, not because of human choices.

The other option would be if such an inconceivable number of universes exist that, by sheer probability, duplicates form. Though how you would ever be able to find these to travel to them is anyone’s guess.

1: Quantum physics is the science of how perception influences reality.
This may be the most widely spread and abused scientific myth of them all. It is commonly said that the aforementioned quantum collapse is caused by "measurement", an unfortunate choice of wording that can imply that a human is needed to observe it. The science fiction community pounced on this, making the logic leap that quantum physics means that perception influences reality, and the myth has been growing further out of proportion ever since.

“Quantum” roughly means “smallest bit,” and quantum physics models matter at the fundamental level as indivisible waves. Particles can only have discrete values, or quanta, of their properties, such as spin and angular momentum. This leads to many interesting and counterintuitive phenomena, but it has nothing to do with perception.


Differentiating between science fact and myth is a skill that needs to be built up. To do this, you could take college-level science classes with math and labs, read scientific journals (not to be confused with news articles), or watch YouTube channels run by experts, like Fermilab, Scishow, PBS Space Time, or Deep Astronomy. A working knowledge of statistics helps too. Look out for when scientists use words like “could,” and “might,” which mean you should take that bit of information with a grain of salt. And when you hear about something new, even if it’s from me, remember to look it up and verify that it is indeed true.
Posted by Christian Horst at 7:29 AM