The Profoundness of Equivalence 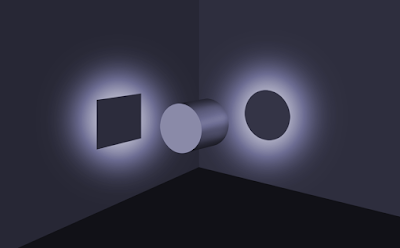 Have you ever had an argument with someone, only to find that you actually agree, but were just using different words? Have you ever memorized a long number in chunks, and then found out that someone else had memorized the number by breaking up the chunks differently? What you have stumbled upon is the principle of equivalence, the fact that something that is true can be thought about in different, yet equally valid ways.

Equivalence appears all the time in physics. The most famous example is Einstein's Elevator, a thought experiment that led Einstein to formulate his theory of gravity, General Relativity. Einstein imagined waking up in an elevator, his body floating above the floor as if in space. There would be no way to tell if he was actually in space, or if he was freely falling down the elevator shaft. This showed him that zero-gravity and free-fall are equivalent, which, with some help from math and a few experiments, led to the realization that gravity is not truly a force but a distortion in spacetime.

For a more down-to-earth example, suppose you are holding a brick. We call it a solid object, and think of it as the stuff taking up the space within its boundaries. But we also know it is made of atoms, which are mostly empty space. So is the brick a solid substance, or is it mostly empty space? It is both. “Solid substance” and “mostly empty space of rigidly arranged atoms,” though they seem completely different, are two ways of saying the same thing. Equivalent.

Of course we also have to watch out for false equivalence, when we treat two things as the same when they are really not. Nothing is as simple as it first seems, and figuring out how to tell the difference is part of learning. The glass is half empty, and it is half full.

Being aware of equivalence and learning to identify it can help us make sense of the world and what is happening around us. Sometimes things that seem unrelated or even contradictory are actually the same thing. If we practice finding these connections, we start to see that the world is a lot more understandable than we may have realized.
Posted by Christian Horst at 9:00 AM