As the summer heat wavers and the first signs of autumn cool peek through the rustling maple leaves like a memory just out of reach in a moment of nostalgia, I am reminded of the ever-evolving passage of time, and the ultimate inevitable approach of Star Wars Episode VII. This month, in the countdown series, we will be looking at Episode III: Revenge of the Sith.


Revenge of the Sith suffers from many of the same problems as the other prequels. However, being the final in the prequel trilogy, there was opportunity for George Lucas to learn from the mistake of its predecessors, and it does appear that he paid some heed to the outcry of the disappointed fans. In my opinion, the action was more engaging than in the previous two films, perhaps because in this one it was more directly related to the plot. The fan service did not seem as forced; I could have done without Chewbacca showing up, but I did like the Yoda versus Palpatine fight scene.

On the upside, the movie fulfilled its main purpose, showing Anakin’s transformation to Vader surprisingly well. Though it may be a lucky coincidence, the lack of emotion or spiritual vibe actually play well at getting the viewers into Anakin’s head. Anakin can’t feel the spirituality of the Jedi, and neither can we. If we did not already know the Sith were evil from the original trilogy, this might lead us to wonder with him if the Jedi have, in fact, been corrupted by the war. At least, we might wonder right up until Anakin becomes Vader and starts slaughtering children. Then it’s obvious that he’s just bat crazy.

The biggest blunder of Revenge of the Sith, I would say, is the Obi-Wan versus Darth Vader battle. It was one of the key turning points of the series, the father-and-son-like battle for the fate of the galaxy. But to me it felt anticlimactic—all flash, no emotion. There was no buildup, no climax, just two guys whaling on each other on the side of a volcano until suddenly it was just over.

However, even this flop of a climax can be seen as an artistic fluke if viewed from the right perspective. Consider what we would hope to see in such an ultimate fight sequence: both the good guy and bad fighting hard with their emotions, sparring and twisting them around each other like they do their lightsabers. In actuality, on the other hand, we see Obi-Wan try again and again to get the emotions into the battle, only to have them roll off Vader as if he did not even notice. Not only is Obi-Wan’s world crashing to the ground and taking the galaxy with it, but not even the epic battle is going how epic battles are supposed to. Hm? No, I guess it’s not a good enough excuse; it’s still lame.

There is one more thing I want to mention. The first thing Anakin does after becoming Vader is to ask Palpatine to teach him the dark side power to save Padmé from dying. In response, Palpatine says, “To cheat death is a power only one has achieved.” Now in context he seems to be talking about Darth Plagueis, the Sith from the story he told Anakin in the Galaxies Opera House. But Palpatine is both a Sith and a politician, a master of manipulation, an expert in speaking true words while implying a lie. Nothing he says can be taken at face value. With that in mind, I have a hunch that maybe, just maybe, the Sith in the trailer for Episode VII could be this one who achieved the power to cheat death. 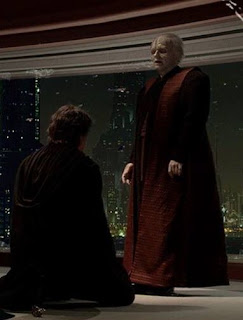 And of course, here is a link to Michael Barryte's “What if Star Wars Episode III Were Good” video. I like his versions so much, that I have adopted them as my head canon.

Star Wars Countdown:
The Phantom Menace
Attack of the Clones
Revenge of the Sith
A New Hope
The Empire Strikes Back
Return of the Jedi
The Force Awakens
Posted by Christian Horst at 7:36 AM