This is it, the final installment of the Star Wars Countdown before the continuation. After watching it this time again, I can still say that it is my favorite Star Wars movie. In fact, it was my favorite movie of all until Avengers 2 came around. With Return of the Jedi, this classic film trilogy closes with a timeless grand finale.

When Return of the Jedi opens with a view of a second death star, one might at first be concerned that it is going to be a copy of Episode IV. However, it quickly asserts its individuality when it picks up both event-wise and character-wise where the film before it left off. Between rescuing Han Solo from Jabba the Hutt, Luke struggling to come to grips with his heritage, and the emperor’s master plan to turn Luke to the dark side and crush the rebellion once and for all, Jedi takes the story to a whole new level.

For the first and only time in Star Wars, we see a full-scale battle play out beginning to end, strategy included. The rebel fleet attempts to take the second death star by surprise, while a team secretly lands on the moon it’s in orbit around to shut off the shield generator. But the emperor has foreseen this, through the dark side of the force. Unfortunately for the rebels . . . 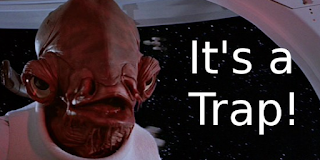 Speaking of this battle, I have an emotional connection to the forest moon of Endor. It seems like a very simple, peaceful place (usually), and reminds me of the wooded countryside where I grew up. Endor also has the charming and mysterious ewoks, who live their village up in the branches of the trees. Some people find them annoying, but I don’t see why. 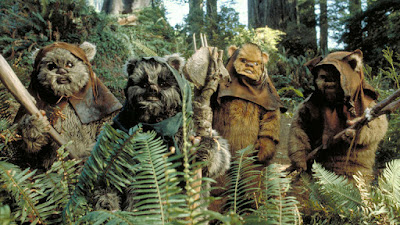 But the true reason I love Return of the Jedi is the final confrontation between Luke, Vader, and the emperor. After Luke has gone through the inner struggles, trials, and temptations of the dark side, he must muster not only his courage, but his resolve and belief in who he is, and not fall to the pull of the swift undertow of the dark side. Not only does he have to face his fallen father, but also the man who twisted Luke’s father around his finger, the one responsible for all of the trouble in the galaxy. But if Luke were to strike him out of anger, Luke would become the very thing both he and the entire galaxy fear and hate.

Return of the Jedi is a dramatic conclusion for an epic series, and if Star Wars had stopped there, I would have been satisfied. But now Episode VII is only a few days away, and I am absolutely ready for more!


Star Wars Countdown:
The Phantom Menace
Attack of the Clones
Revenge of the Sith
A New Hope
The Empire Strikes Back
Return of the Jedi
The Force Awakens
Posted by Christian Horst at 6:18 AM