Is the End of Time inside a Black Hole? Chrono Trigger Video Game Theory

In Chrono Trigger, widely acclaimed as having one of the best stories in a video game, the characters travel between time periods, influencing the course of their fictional history on a quest to uncover a plot that has been in the making for mega-anna. Each time period has a label—600 A.D., 1000 A.D., 12,000 B.C., and so on. But when they crank the dial past the furthest date and off the scale, they find themselves at a place called the End of Time, where only a few pieces of land float in a dark void. The time stamp for this dreary, mysterious place is “infinity.”

At first glance, it doesn’t make sense for there to be an actual time called infinity. After all, infinity is always as far away as ever. Time can keep passing, on and on and on. The stars will burn out, the galaxies fizzle away, but infinity will never get any closer. Therefore, the End of Time must be simply a poetic device the game makers put in to make the game feel more mysterious.

Or must it? The ancient Greek philosopher Zeno of Elea showed a curious puzzle about infinites, which is known as Zeno’s Dichotomy Paradox. Zeno noticed that if someone were to run a race, he would first have to run half the race, then half the remaining distance, and then half the distance that still remained, and so on and so forth an infinite number of times. Though it is against our intuition that an infinite sequence of events can happen in a finite amount of time, runners do indeed finish races, so we must accept that it is possible.


According to Einstein’s General Theory of Relativity, time passes more slowly in a gravitational field. The stronger the field, the slower the passage of time. In fact, where there is strong enough gravity, time will completely stop. For a black hole, this happens at its event horizon.

If this is confusing, don’t sweat the details; we’ve just gotten to the important part. Remember, time passes differently in different reference frames. In the reference frame of someone falling into the black hole, they would pass right through the event horizon no problem, just as they would expect to from gravity. They don’t notice their own time slowing; to them it seems like the rest of the universe is speeding up. This person ends up inside the black hole, so we know that events inside black holes do happen. In the frame of an observer who stays far away from the black hole, however, the time around the event horizon slows to a crawl, and so the falling person takes an infinite amount of time to pass the event horizon. This is why it is called an event horizon; events on the other side are removed from the rest of space and time.

In summary, things inside of black holes happen after an infinite amount of time has passed. If any place could be called the End of Time, where the date is infinity, it would be the inside of a black hole. A time traveling space ship would have no trouble getting in or out though, so it would be an opportune place for Crono and his magical companions from throughout history to set up a base, out of reach of their eldritch abomination archenemy. 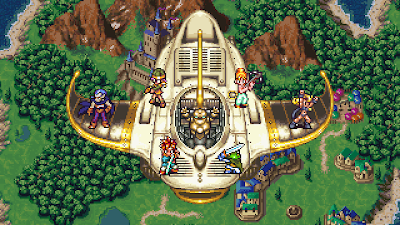 Posted by Christian Horst at 6:10 AM