The Dance of Reason and Rhyme 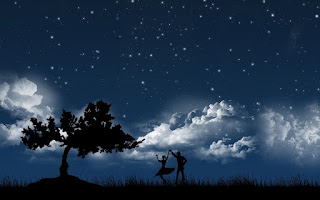 Under the light of the stars and the moon
A girl named Rhyme danced and sang to a tune
She sang of the way that the world came to be
When the wind kissed a sunbeam and bore him a tree
Whose boughs held up oceans, mountains, and seas

Watching nearby stood a scholar named Reason
Shaking his head at her naive depiction
From such a delusion, no sense could he make
Out onto the meadow, a step he would take
To cut off Rhyme’s song and correct her mistake

Over the features of Rhyme spread a grin
Laughing, she offered a warm hand to him
Reason considered and slowly accepted
Following step, but the path, he directed
And soon felt at ease, his derision deflected

Twirling in tempo, hand in light hand
The two sang a true verse in poetry strand
Of galaxies swept out in web-like smattering
Seeded in splendor by symmetry shattering
Long ere the moment of last scattering

Posted by Christian Horst at 6:28 AM