Our brains automatically think of space and time as absolutes. A yard in a straight line is a yard, no matter who is measuring or calculating it. The present is a special moment in time, and it exists right now all across the universe. A minute is a minute, and it is the same for everyone everywhere. It’s intuitive and obvious. And none of it is true.

To understand why, we have to look at a little theory called Special Relativity. It is one of Einstein’s most famous insights, and one of the reasons he is known worldwide as the face of genius, because he questioned our natural understanding of space and time and found a deeper truth.

The simplest place to start is to draw a coordinate plane, with position going horizontally and time going vertically. As an object moves through time, it moves upward on this graph. We ignore the other two dimensions of space, both because a 4-dimensional diagram is hard to draw and to look at, and because they aren’t necessary for the concepts we’re interested in. 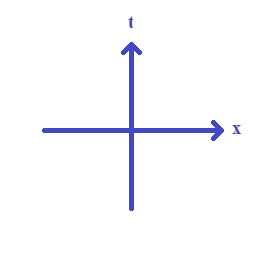 Now that we’ve set up our coordinates, we define a term called a reference frame, a set of coordinates where zero is set to a specific location and speed. It might be tailored to an object, or just a point in space. From the origin (0,0), we draw four lines at 45-degree angles. These lines below the x-axis are the paths light from the past takes to reach the object at point 0, and the lines above the x-axis are the paths light takes coming from the object at point 0. These are called light cones. 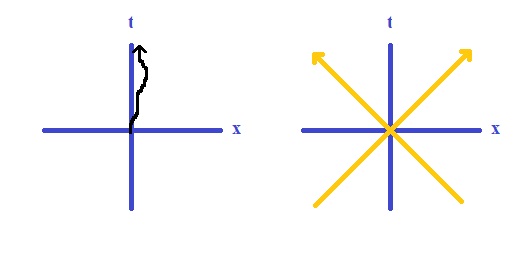 Now you might think, “What’s the big deal? Just speed up until you catch up to light, and then you’ll be going faster than it.” Well here’s where the craziness comes in. You see, light always travels at 45-degree angles on the space-time diagram in every reference frame, no matter how fast you or any other person or object is moving. If you are standing still on the Earth, and your friend takes a bullet train past you at 1000 miles per hour, the speed of light for you is the same in all directions as the speed of light for your friend: c. Your friend does not calculate light in front of them traveling any slower than the light behind them. They calculate both light beams traveling at the same speed, c.

This is why nothing can go faster than the speed of light. No matter how much you speed up, light will always be traveling at c ahead of you, and you can never catch up to it no matter how much you accelerate. In the reference frame of someone standing still and watching you, you go closer and closer to the speed of light, but never reach it. This causes your time to slow down, your mass to increase, and your shape to flatten. You of course don’t notice any of this stuff, because it’s not happening in your reference frame.

Make a note of the fact that time passes slower for someone traveling close to the speed of light. This is going to be important later on.

If we look carefully at the way the axes change when we transform between coordinate systems, we’ll see that this means a universal “now” doesn’t exist! To show this, let’s take the x-axis, which is the slice of space-time where t=0, and what we think of as “now” across the universe. But your friend’s x-axis point in a different direction through space-time, meaning their “now” slice is different from yours! Mind blown, right? To drive the point home, let’s suppose there is a firecracker set to go off at a certain time 1000 miles away. According to your “now” slice, the firecracker is about to go off. But according to your friend’s “now” slice, the firecracker has already gone off! 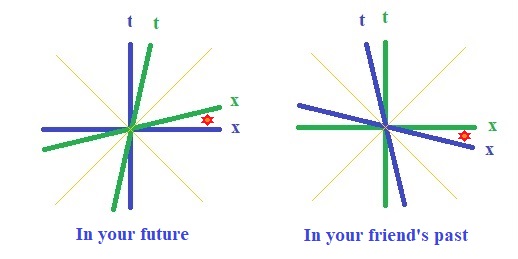 There is no universal “now.” Each point in space-time is its own “now,” both in time and space. “Now” for you is only now for you, everyone and everything else has their own “now.”

There is nothing special about the t-axis in our diagrams. You can move in one direction, and then you can stop and turn around and go the other direction. In the same way, there is nothing special about the x-axis. If something were somehow able to travel faster than light, there would be nothing stopping it from going in a slightly future direction, then turning around and going in a slightly past direction. The fundamental boundaries are the light cones, not the t- or x-axes. 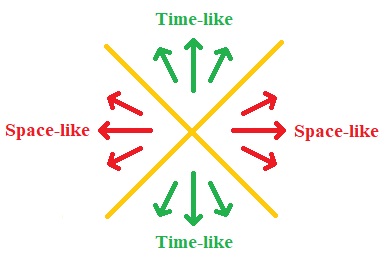 This means, if you were somehow able to make a ship go faster than light, all of the space-time between your future and past light cones would be open to you. This means you could set off going slightly backward in time, then turn around and go slightly backward in time the other direction, and get back to where you started before you began. It doesn’t matter what the method is, if you can travel faster than light, you can go back in time. 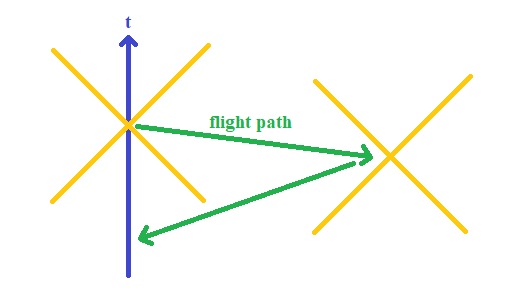 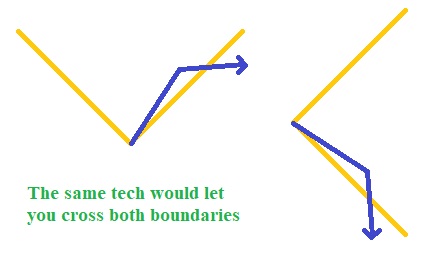 Warp drive, hyperspace, whatever your method is, the math doesn’t lie; according to Special Relativity, if you can travel faster than light, you can also go backward in time. But what about taking shortcuts? What if you don’t have to travel the vast distance between stars, but can get there in a single step? What if we could use a wormhole?

A wormhole is a theoretical object that comes out of Einstein’s other theory, General Relativity. Wormholes are interesting enough that we might give them their own discussion, but all we need to know today is that a wormhole is a shortcut between points in space-time. You can think of it like a doorway, but instead of leading to another room, it leads to a different planet.

You might think a wormhole is something that picks you up and teleports you away. This is a misconception. As you walk through the wormhole, nothing is happening to you that doesn’t happen when you take a walk down the street. The two ends of the wormhole might be light years apart the normal way, but on a path through the wormhole, they are only separated by a few feet. This isn’t just a metaphor, it’s literally true.

Wormholes, it turns out, also allow for time travel. To demonstrate this, let’s start with a simple setup, a wormhole where the two mouths are five feet away from each other and synchronized in time. If you look through the wormhole, you can see your own back five feet in front of you.

We put one of the wormhole mouths on a spaceship, and fly it around near the speed of light. Remember from earlier, if something is moving near the speed of light, time is slowed down for it. This means time is passing slower for the mouth of the wormhole on the ship than it is for the mouth on Earth—but only on the path through space from Earth to the ship. On the path through the wormhole, time is passing at the same rate on both sides. You could step through, have tea for half an hour with the astronauts, and when you step back, half an hour would have passed on Earth. 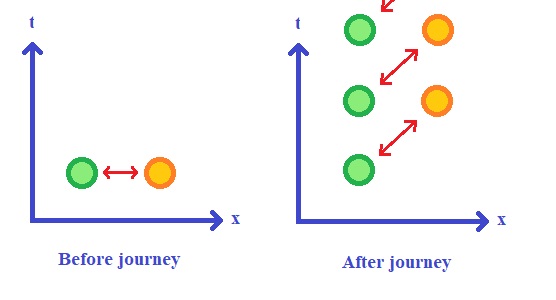 What about quantum entanglement? Can’t we send messages instantaneously by measuring one particle and instantly affecting another one light years away? Wouldn’t this achieve faster-than-light communication without time travel? The answer is no, because in order to send information by quantum entanglement, the two parties must compare notes via traditional channels. Also, it’s incorrect to say whose measurement affected whose, because in some reference frames person A measured their particle first, and in other reference frames person B measured their particle first. When measuring entangled particles, there is no causation, only correlation. 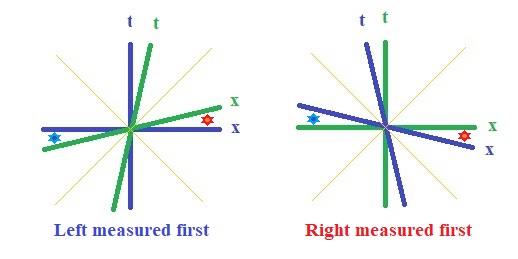 In science fiction, we see faster-than-light travel all the time, but time travel usually takes some special magic sauce. This isn’t because of science, but because easy time travel would ruin the plot. Another reminder of the difference between narratives and reality. We may try hard to come up with a loophole that doesn’t allow time travel, but the fact that there is no universal “now,” and all spacelike trajectories are open to a faster-than-light traveler, nails the box shut. I am all for imagination, of course, but when it comes to reality, despite how strange it may be, we should allow ourselves to follow the evidence where it leads.
Posted by Christian Horst at 10:27 AM